Flutter vs React Native: which one would be the right option for my application? If you’re asking yourself this question, you probably already know that the choice will not be easy. Although React has been around for a while now, the up-and-coming Flutter framework makes an interesting alternative.

As you might have guessed, there is no one-size-fits-all. In this article, we’re going to go through the main differences between React Native and Flutter. We hope this will help you pick the best fit for your app!

What is React Native?

React Native is an open-source JavaScript framework for creating iOS and Android applications. It was created by Facebook in 2015, and it’s based on another Facebook product, React for web applications.

Even though it’s not truly “native”, this framework is intended to ease app development and make them look and feel like native solutions. We’re going to discuss this aspect later in more detail.

Fully released in 2018, Flutter is much younger than React Native, yet it’s already taken the UI development world by the storm. This framework was created by the Google community to speed up the development of good-looking native apps. Flutter uses an object-oriented programming language called Dart.

Many well-known brand have developed their application with this cross-platform Google’s framework. Check the list of top apps built with Flutter!

The main differences between Flutter and React Native

One of the most important things about React Native mobile app development is that it uses native UI components. This comes with a certain risk: when a new version of the operating system is released, it may break the interface of your application. When you’re working with React, you need to remember that it might need extra maintenance in the long run. On the other hand, any native updates (e.g. changes in navigation gestures) will be applied automatically in React Native applications. In the case of Flutter, you need to implement them manually.

Flutter prides itself on increased time-to-market speed. It has its own rich library of components. These can be applied across different platforms and operating systems. The developers don’t need to write platform-specific codes, which reduces the number of working hours needed for development. This is a huge advantage for the business! In other words, Flutter can significantly reduce the costs of the process.

What’s more, Flutter was primarily designed for fast development of user interfaces based on Material Design rules. If this is what you’re after, using Flutter is sure to speed up your work.

React Native doesn’t come with its own library of widgets – you need to use third-party libraries instead. This may slow down the development process. On the other hand, React works really well for creating customized user interfaces. When you’re working with custom solutions quite often, it might be a better choice for you.

It’s also important to note that both Flutter and React Native support reusable code, yet there is one noticeable difference. Flutter developers can overwrite particular parts of the code, while React Natives requires more adjustments. Again, Flutter proves to be a better time-saver – and time is money, isn’t it?

It’s important to note that both frameworks compile in a different way. React Native always needs a bridge between JavaScript and native modules. In the case of Flutter, most components are already a part of the framework.

As a rule of thumb, Flutter is usually faster. The reason behind it is that all Flutter processes are fully native. In contrast, not all actions in React Native are performed natively. This is why it’s not 100% native, despite its name. For instance, React Native handles gestures both through JavaScript and native solutions. The bridge between these two makes it less efficient. In the case of Flutter, it only happens on the native side.

On iOS, React Native apps appear to be significantly slower than Flutter. If you’re looking to develop something super swift, Flutter will make a better pick.

Flutter apps are typically bigger than React Native ones. The main reason behind it is the C/C++ engine. It’s important to note, however, that React Native apps are still relatively big. No matter which one you choose, every mobile app development framework will make the app a bit bulkier.

When it comes to the impact of size on performance, Flutter’s bigger apps are typically faster. All the features that take up place make the app faster in the end. React Native is trying to keep up with the help of dedicated engines, such as Hermes.

Dart, the language behind Flutter, has a pretty simple syntax. This makes debugging and maintenance easier. The Google framework also boasts an extensive set of dedicated debugging tools.

The documentation and a huge community behind the framework are the strong suits of React Native. There is always someone you can ask for advice. Of course, Flutter has a rapidly growing base of developers as well. It’s safe to say that both frameworks are doing quite well in this area.

There is yet another issue that’s worth considering. When your team is already familiar with either React Native or Flutter, it’s always an extra cost if they’re supposed to learn another language.

So, which one is easier to learn? Some might vote for React Native, as it works with JavaScript and should be more convenient for developers familiar with that language. The community is quite mature too, which makes learning easier.

This doesn’t mean that Flutter is hard to understand. As we mentioned before, Flutter works with Dart, which is less popular than JavaScript. The developer needs to put some effort into learning, yet it shouldn’t be too challenging. Dart is a type-safe and object-oriented language just like JavaScript. Switching from one to another usually goes quite smoothly. What’s more, Google shares a wide choice of Flutter tutorials and resources for free.

To sum up, both Flutter and React Native are quite easy to learn if you’re experienced with JavaScript.

Flutter is easier to scale across different platforms and operating systems, as all UI components remain the same. This is a massive facility for every Flutter development agency. This means that the user interface will look exactly same on both iOS and Android. Because of that, you’re also less likely to face compatibility issues on different versions of the same OS.

Another huge advantage is both the speed of development and the app itself. If a high tempo is what you need, Flutter is sure to meet your needs.

Get regular updates from the world of tech.

Want to learn more about the main benefits of Flutter? Check our comprehensive guide!

As we’ve already mentioned, React Native is older and more established than Flutter. React Native apps can be found among the most popular ones in the world, which is not yet true for Flutter apps. Because of that, React boasts great community support, as well as a wide choice of libraries and integrations. It’s also slightly easier to adapt, as your developers won’t need to learn other languages than JavaScript.

Sometimes it’s also an exclusive option when you need a very specific solution. If you have to create a stable biometrics authentication process or integrate with a KYC (know your customer) service, React Native is probably your only choice.

Flutter or React Native: which one is for you?

Down to the big question: which one is better, Flutter or React Native? To be completely honest, we’ve got a really close tie here. The answer depends on your resources and the kinds of apps you’re looking to develop. While React Native has been around for a longer period, Flutter is an exciting (and usually swifter) newcomer.

Considering other options for your next digital project? The Flutter vs Kotlin vs Swift guide may help. Learn more to make a well-informed decision! 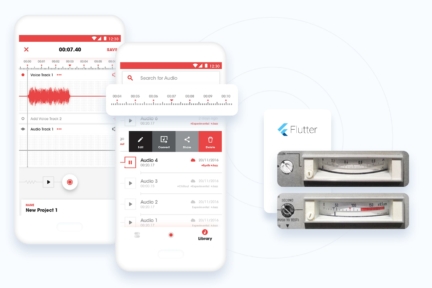 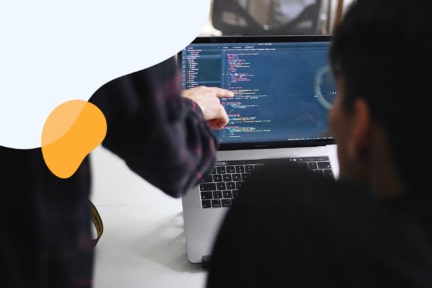 Xamarin vs Flutter: which framework is better for mobile app development?